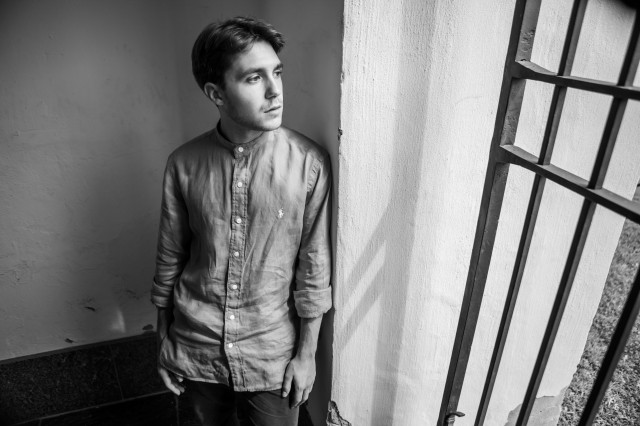 Tell us about your artistic path

I was born and raised in Lugano, Switzerland. During my teenage years I approached different disciplines such as skateboarding and graffiti writing, experiences that would go on to influence my vision of urban landscapes and architecture. At the age of 21 I moved to Milan, where I studied and practiced filmmaking. In 2019 I made my first short film L’azzurro del cielo, a project I presented the same year at Locarno Film Festival, and at Laceno d’Oro Festival. At the Mendrisio Academy of Architecture I attended two editions of the Filming architecture workshop. The first edition was led by Heinz Emigholz and Marco Müller, while the second by the Italian filmmaker Ila Bêka. In the course of 2021, I shot the short movie Piazzale D’Italia, in competition at Laceno d’oro 2021. A few weeks ago, I came back from Lanzarote, where I had the opportunity to spend almost two weeks with Werner Herzog and other filmmakers from all over the world for a workshop.

Piazzale d’Italia stems from a visual suggestion. Visiting the building the project is focused on, I noticed a glimpse of the square below that immediately reminded me of Giorgio de Chirico’s Piazze d’Italia, and I got the idea for the title. Furthermore, in the context I worked in, there were many interesting elements, such as the indecipherable nature of the architecture and the geographical ambiguity of the country, since we are in an enclave. It is a very controversial and debated building in Ticino, both for its enormous structural dimensions and for the administrative events it’s been involved in recent years. My original intent, however, was abstracting the building from reality, to transform it into something else, to imagine another possible function. For this reason, I speak about it so vaguely, without revealing what it is.

Over the last ten days, I happened to attend two festivals, one in Switzerland and the other one in Italy. Apart from the facemasks, it seems to me that little has changed, the dynamics are the same; I have met the usual people and had the usual conversations; and I have also seen good and not-so-good films. Sure, the pandemic was a big shock for everyone, but I think it sped up trends that were already underway, rather than radically changing them. In 100 years, cinema will be something else, just as it was different a hundred years ago. This is inevitable. What worries me is the increasingly superficial relationship we have with images. We live in an irreversible excess of images, within a society where images have become the true universal language. I think artists should be aware of this phenomenon. Perhaps schools should introduce classes to teach students how to look at things, to see them, and enjoy them, to understand this daily chaos of images. By improving our collective awareness towards images, cinema, and other visual languages, we could be less worried about our own destiny.

Mauro Santini: Diary of a festival