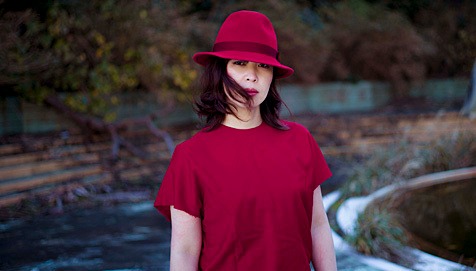 The 47th edition of Laceno d’Oro is fast approaching. While waiting to welcome again our audience and fill the halls of Partenio theatre with new images, guests, and events, let us meet for an exclusive preview, a live concert in the Crypt of Avellino Cathedral. To retune on the frequencies of cinema, between images and sounds, on November 22 we’ll proudly welcome Eiko Ishibashi, Japanese multi-instrumentalist and composer of soundtracks, known all over the world for her musical contribution to the award-winning movie «Drive My Car», winner of Best International Feature Film at Oscar Academy Awards 2022 and Prix du Scénario at Cannes Film Festival 2021

Ishibashi is an artist who’s been able to experiment and reinvent herself from song writing to experimental music, always true to her own personal style and without losing her way. After her collaboration with Jim O’Rourke, “one of the greatest irregulars of American underground”, for his album “The Dream My Bones Dream” (2018) – a project dedicated to the memory of the artist’s father, after having found photos from a chapter in the life of the man which he was totally unaware of – in 2020 she was commissioned to create music for art and photography exhibitions, such as “Japan Supernatural” at the New South Wales Art Gallery in Sydney and “Memory of Future” at Mandako coal mine in Kumamoto, Japan.

But the popularity she achieved with her score for “Drive My Car” should not be labelled as a simple footnote or an exception in her artistic path: Eiko Ishibashi had already stood out for her soundtracks composition in 2016, creating music for “Albino’s Tree” , directed by Masakazu Kaneko, for which she was awarded Best Music Award at Cinalfama Lisbon International Film Awards. Later, in 2019, she composed music for the anime “Mugen no Juunin” – IMMORTAL” . Her relationship with moving images is never one of arrogance or challenge: she proceeds in parallel to a music capable of enhancing the feelings triggered by the movies. As she revealed in an interview about her work for “Drive My Car”: “I felt the script managed to sublimate a complex story about multiple levels of loss into a universal and simple narrative. When the images emerged, the beauty, the great acting of the actors, the sharpness and brightness of the sounds of the cars and boats all came to life. I created the music with the hope it would emphasize those images and sounds, all the while adapting to the flow of the story”

So, we’re looking forward to see you on November 22 for Eiko Ishibashi live concert at the Crypt of Avellino Cathedral, at 20:30. Please, book your place online via our website: the seat limit is set for one hundred units, so in case you’ll be unable to attend the concert after booking, please cancel your reservation in order to allow others to be there.